With a more fuel-efficient engine and a higher price tag, can the venerable Alto still attract first-time buyers?

It may not have the celebrity status that the highly successful Maruti 800 once enjoyed, or the highly unsuccessful Tata Nano, but the indisputable fact is that the Suzuki Alto, based on the numbers it sold, is by far the most successful car in the 75 year history of the Indian automotive industry. The Alto is the real people’s car, having given personal mobility to millions – 4.3 million customers to be exact – but this unassuming budget hatch wears its enormous achievement quite lightly on its small wings.

So when a new Alto arrives after a decade, it should be a momentous occasion for affordable mobility, except economy cars these days aren’t that affordable and require a much bigger budget. The cost of hardware and a series of regulatory and equipment requirements have caused car prices to skyrocket. Maruti Suzuki has attempted to insulate the new Alto K10 from these cost increases, which have the greatest impact on the low-end cars on the market, and to this end has priced the standard entry variant at an attractive Rs 3.99 lakh. However, moving up the spec ladder to the variants most people want, the Alto sees a substantial jump in price and ends up with a not-so-cheap Rs 5.84 lakh VXi+ automatic. Sure, you get a fair amount of standard equipment, but for a car that has price at the heart of its appeal, can the all-new Alto K10 continue to entice the entry-level car buyer?

The immediate impression is that the all-new Alto has a lot more wow factor than its predecessor, which incidentally continues to sell with the 800cc engine. Based on the same Heartect platform as the S Presso, the new Alto K10 looks nothing like the old car and, in fact, it’s an all-new design. It has a new found cuteness, looks refreshing and cheerful and yet doesn’t stray from the tastes of the conservative Alto buyer.

The focal point of the design is the nose which contains a lot of Swift. The large hexagonal grille, sleek headlights and subtly sculpted chin certainly make the Alto stand out, while at the rear the slightly sloping C-pillar gives the car a sportier look than the previous Alto which had a part straighter rear. The soft sculpting and character lines give the car’s sides a bit of a bump, but the 13-inch wheels look a little dwarfed and a size smaller below the high window line. Overall, the new Alto has a well-balanced, well-rounded design that’s sure to appeal to its mass customer base.

The interior design is quite simple and doesn’t stand out like the exterior. The talking point here is the Kwid’s obviously inspired all-digital instrument cluster. The cluster is the same as the S Presso, except that in the latter it is placed on the center console, while the new Alto has it behind the steering wheel. It’s pretty basic though and all you get is a speedometer and fuel gauge and a warning light cluster that eliminates the need for any other gauges. There’s no tachometer either but, frankly, does an Alto owner really want one? 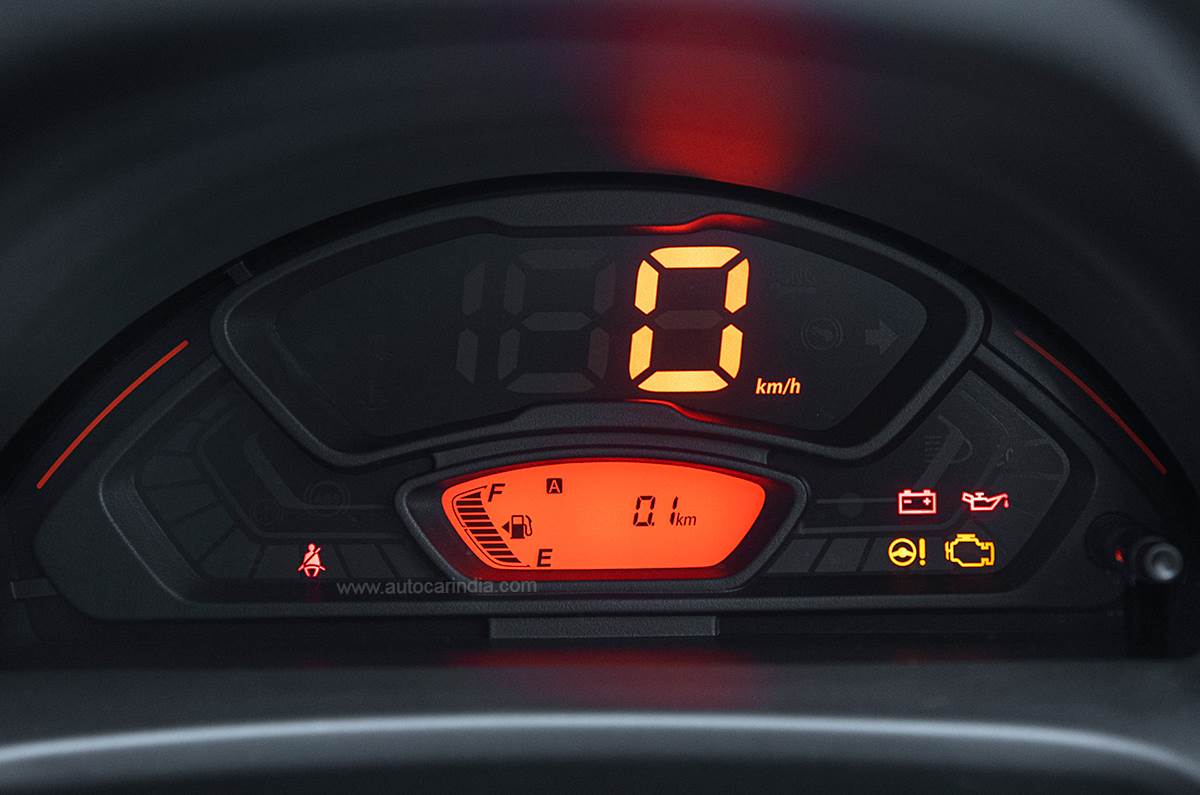 The steering wheel design is sportier than before and now has volume and phone controls, while the power window buttons have been moved to the dashboard and are quite convenient to use. The dash itself is a bit more sculpted and not a chunky slab of plastic like in the previous Alto, giving more knee room for the front passenger. This, however, came at the expense of the glove box which is smaller than before but still roomy enough to hold your essentials. The center console has a pair of cupholders and two small cubby-holes that won’t hold more than a small smartphone. Door pockets are generous for liter bottles, but rear passengers don’t get that luxury and have to make do with pockets in the back of the front seats. The overall quality of the plastic is pretty decent for a budget car and wired to withstand years of use. The Alto’s cramped cabin has always been short on space, but the new model surprised us with the amount of legroom and headroom offered in what is dimensionally the smallest car on the market. At the rear, headroom is pretty good as is knee room and the new model clearly benefits from the 20mm increase in wheelbase. Under-thigh support is also very good, but sitting three abreast is nearly impossible and as a result the Alto is a four-seater at best. 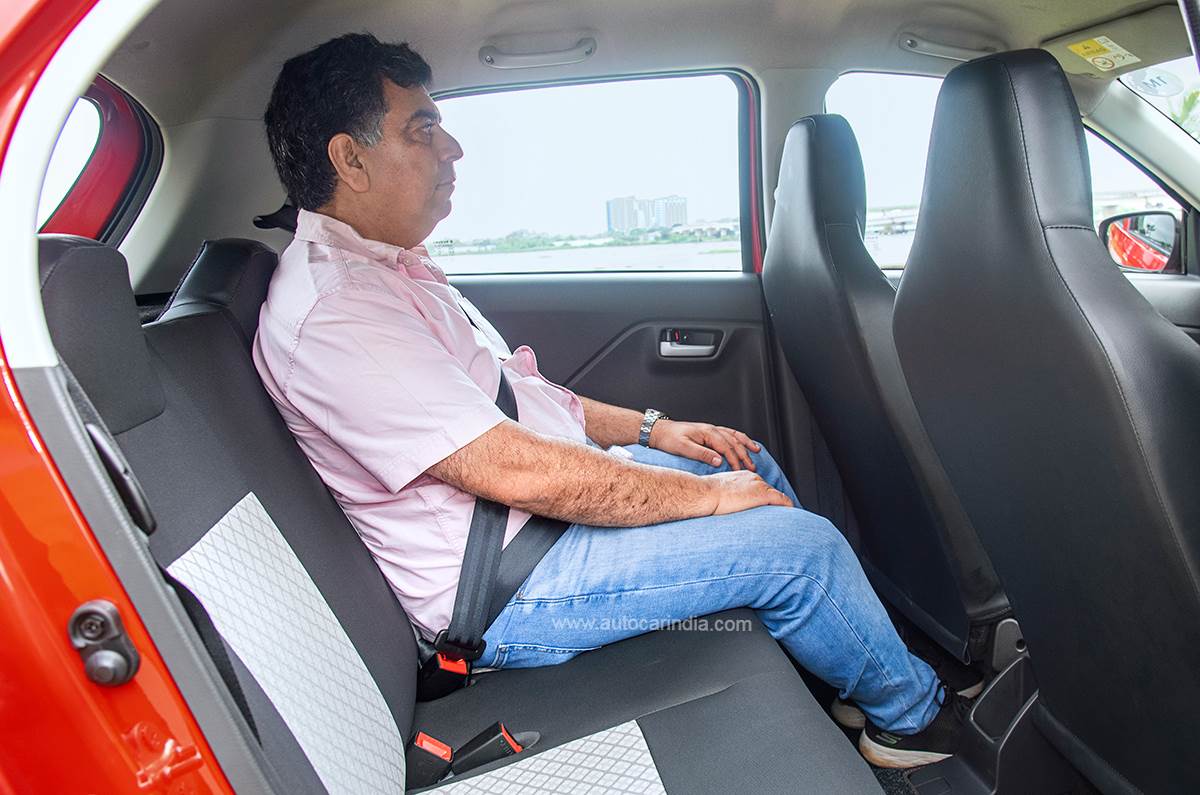 The front seats are quite comfortable, all the controls are logically laid out and fall easily to hand. There’s no driver’s seat height adjustment, even on top-end models, but you don’t sit too low. Shorter drivers may have a problem with the high dash, but visibility is quite good thanks to the slim A-pillars and the car’s compact dimensions, making the Alto ideal for weaving through narrow lanes and crowded. Boot capacity is a paltry 214 liters and the loading lip is quite high, making it impractical to load heavy bags. What’s nice is that the trunk is smartly designed allowing you to make full use of the limited space on offer and you can actually fit quite a bit of luggage and if you fold down the rear seat back in one room, there is room for many Suite.

In terms of equipment, the Alto K10 has the essentials such as power steering, gear shift indicator, remote central locking, body color bumpers and door handles and intermittent wipers. The SmartPlay infotainment system is the same as in the S-Presso and gets Android Auto and Apple Play. If we can accept the absence of electric windows at the rear and exterior mirrors with manual adjustment, what is inadmissible is the absence of a rheostat for the interior rear view mirror which seems to us to be a fundamental safety element and essential. Speaking of safety, the new Alto only gets the standard dual front airbags, ABS and EBD, front seatbelt pretensioners and rear parking sensors.

The Alto K10 is powered by a one-litre, all-aluminum three-cylinder engine that is now the mainstay of Maruti’s entry-level range. The new engine has been updated to meet the latest emission standards, including the stricter BS6 Stage 2 standards, which come into force next April. The Alto K10 comes with two transmission options, a five-speed manual and a five-speed automated manual transmission that Maruti calls AGS (for Auto Gear Shift). The manual gearbox makes the most of the spirited 67bhp engine and right off the bat the Alto accelerates quite vigorously and you won’t complain about a lack of punch. On the open road, you need to make good use of the intelligently spaced five gears to overtake and this engine feels strongest in the upper half of its rev range. The engine gets quite audible the more you rev ​​it, but it never sounds harsh or strained and, in fact, it’s one of the smoothest three-cylinder naturally aspirated engines on the market. Partial throttle response is also quite good, and in town light touches of the accelerator pedal are enough to keep you going with the flow of city traffic. It’s only in a stop and go, bumper-to-bumper environment where you have to constantly step up and down the throttle that you experience a bit of low-speed jerkiness, the result of a ’tilt-over’ and tipping” aggressive calibration in the interest of fuel economy. Fantastic fuel efficiency is one of the Alto K10’s strengths and something owners not only expect but also demand and in this key area the Alto does not disappoint. With a certified figure of 24.39 kpl for the manual and 24.90 kpl for the automatic, the Alto is the most fuel-efficient economy car today. After the manual, the AGS-equipped Alto K10 feels a bit sluggish over the distinct pauses between shifts, especially in the lower gears. The AGS is quite responsive to kickdown, but passing on the highway requires a bit more planning. In city traffic the AGS works very well and the line steps are very smart with a creep function that works extremely well. As a result, it’s fairly easy to modulate the throttle while moving slowly through rush-hour traffic. If there’s a grouse, it’s a bit of a vibration you feel when the clutch engages, the result of a low idle speed tuned in the interest of fuel economy.

Light, nimble and compact with a tight turning radius, nothing beats the Alto when it comes to weaving through tight, congested lanes. It’s easy to park, can fit into small spaces, and takes the stress out of driving when you’re jostling for road space with bikes, rickshaws, pedestrians, and other cars. For a small car, it tackles bad roads extremely well and you’ll be surprised how it dives in and out of big potholes with aplomb. Fantastic ground clearance, short overhangs and a short wheelbase, give the little Alto a capability that would embarrass some SUVs. The high-profile 145/80 R13 tyres, which have significantly higher sidewalls than the previous K10, cushion you well against bumps. The steering is light and requires little effort, but is fairly devoid of feel and suffers from a lot of slack around the straight-ahead position. While not a problem in city traffic, the steering doesn’t inspire much confidence at high speeds. The ride also gets quite jerky on a bumpy road and you constantly have to make corrections to the steering wheel at high speeds. Under heavy braking, too, the Alto, while stopping effectively, flickers a bit, especially if the surface is uneven. Clearly the Alto lacks the planted, secure feel of a bigger car and it’s best to limit your speed on the motorway.

The Alto K10 is an honest car that keeps all its promises. Yes, there are several trade-offs, including an overall lack of space and it’s not as affordable as it once was. But the core values ​​of the Alto remain intact. It’s an incredibly stress-free car that’s easy to live with, easy to drive, and cheap to own and operate. It’s also surprisingly capable in all environments, making it a good all-around car that first-time car buyers are sure to appreciate. The new design has injected a fresh dose of appeal that will surely win over more buyers, and that’s why the company is quietly confident that the indomitable Alto will return to its place – at the top of the sales chart.