Version 13 of the Google-sponsored Angular JavaScript framework has arrived, and the old View Engine renderer is gone, along with support for IE11, making Angular faster and smaller.

The latest version is as remarkable for what has been cut out as it is for what is included. Mark Thompson, Google Developer Relations Engineer noted the obsolete view engine, the old Angular compilation and rendering engine, is no longer available. According to Thompson, this means that “teams can expect faster compilation because metadata and summary files are no longer included.”

The current renderer, called Ivy, is now used everywhere and is further improved and optimized. This allowed for the modernization of the Angular Package Format (APF) and less use of the ngcc compatibility compiler, as well as the simplification of the component API, resulting in more concise code.

It is also advantageous to eliminate “IE-specific polyfills and code paths”. Developers with existing apps can run an update command that will automatically remove them, reducing the size of the bundled app.

Another change is the use of a persistent cached version by default, with an improved build speed of up to 68%, according to Thompson. Other improvements include an upgrade for RxJS (Reactive Extensions Library for JavaScript) to version 7.4 from version 6, which means, among other things, a 50% reduction in library size and support for TypeScript 4.4. Inline font support has been extended to include Adobe fonts as well as Google fonts.

A lot of work has been done here which should make Angular 13 considerably more accessible, although individual developers have work to do to take advantage of it as well. 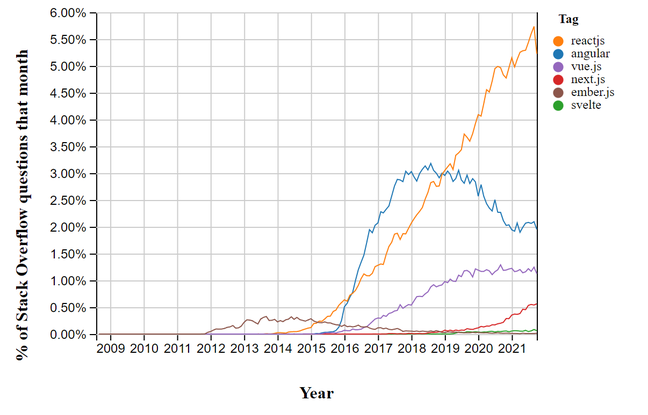 According to the latest StackOverflow developer survey, React.js is the most used JavaScript framework with Angular in fourth place – or second place considering that jQuery and Express are less comparable. This suggests substantial use of Angular (22.96%), although it is less popular than others such as Svelte, React.js, and Vue.js (according to the “Most Liked” section of the survey ).

Note that Angular (which uses TypeScript) is separate from the old Angular.js, which uses JavaScript. Angular.js has the distinction of being “the most feared” in the survey, while Angular has a respectable position in the middle of the table.

We took Angular 13 for a brief tour with Visual Studio Code, noting that the initial compilation of even a Hello World app still feels slow, but a mitigating factor is the benefit of hot reloading the module – so editing source code makes immediate and rapid changes to the running application.

Although it may be out of date, Angular is a safe choice that Google complaints helps developers follow its best practices. ®