The government likes to talk about dual engine growth in Uttar Pradesh (UP). In the recently tabled Union budget, there was talk of a seven-engine growth strategy.

The repudiation of this metaphor makes sense when one considers the government’s penchant for concealing information. The recently filed economic study does not contain the section on statistics which was so valuable for anyone wishing to study the Indian economy. Access to responses from the Lok Sabha and the Rajya Sabha has become extremely difficult, if not impossible.

But a response tabled by the government to the Rajya Sabha on February 7, 2022 helps a lot. Responding to a question (#632) from Mr. V.Shreyams Kumar, on the disparity in per capita incomes in various states, the response given by MOSPI’s Minister of State, Rao Inderjit Singh, was quite revealing.

An important finding is that unlike a dual engine growth in UP, the state has the second lowest GDP per capita growth compared to other states in India (see chart). The lowest per capita GDP was in Bihar. But Bihar has seen growth in GDP per capita year on year over the four years under review. This suggests, quite emphatically, that Bihar’s economic policies are on the right track and the number per capita has increased. 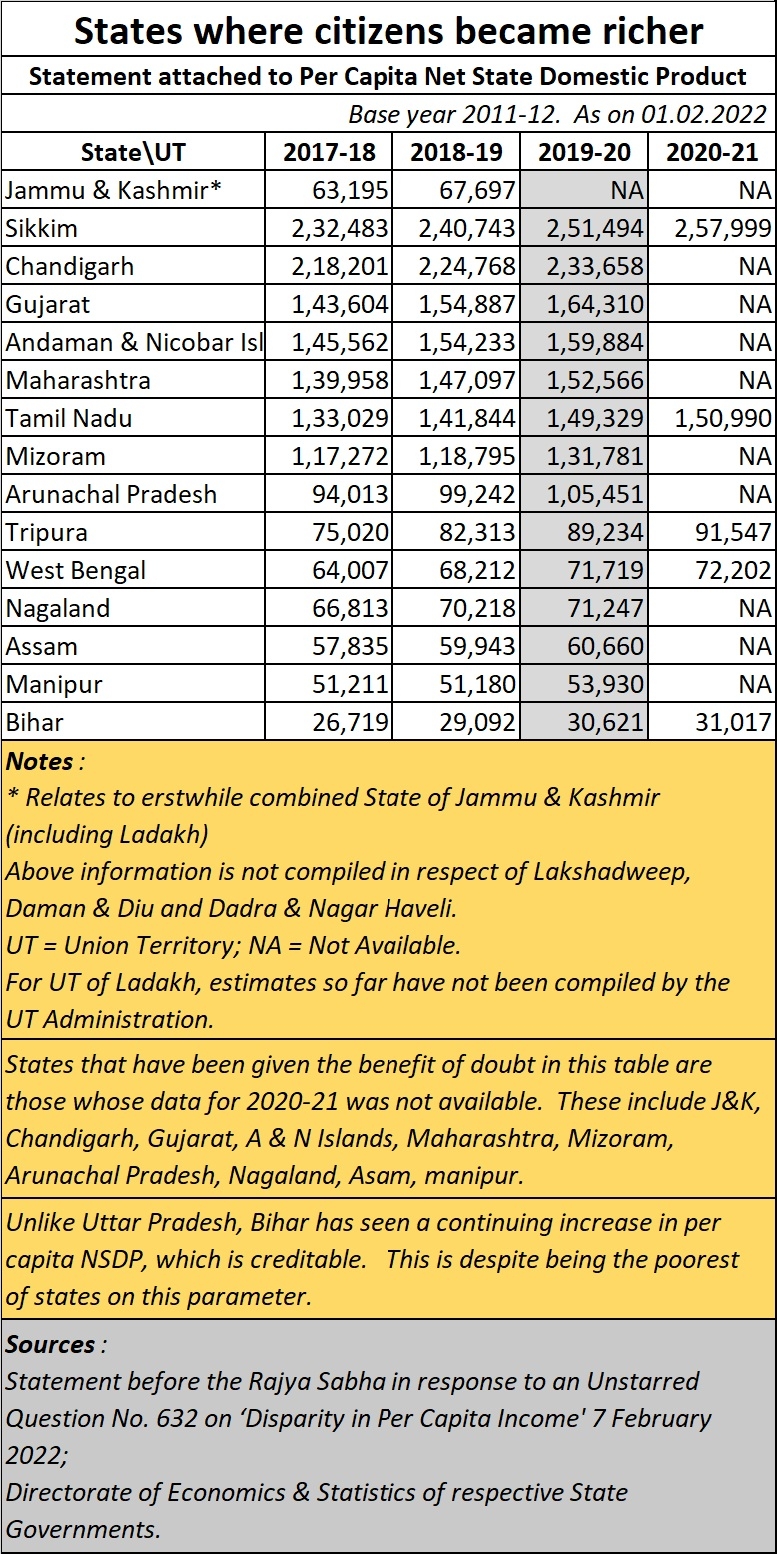 Compare these numbers with states that have seen their GDP per capita increase. Take the figures for Sikkim where GDP per capita was 257,999 rupees, or Tamil Nadu (TN) where it was 150,990 rupees. This means that an individual in Sikkim got six times more than the individual got in UP, and the man in TN got 3.7 times more than the person in UP. None of these states had a twin-engine approach. None of these states received central grants like UP did. But these two states had better human development indices than UP. Both states had invested more money in their people (better education and health) than the dual-engine state. The UP’s record on literacy, health and governance is terrible, and the collapse in GDP per capita confirms it.

UP has been shorting its farmers on wheat and rice, failing to secure a higher supply from either state supply agencies or the Food Corporation of India or FCI. Bihar, however, encouraged its farmers to move away from rice and wheat and grow maize instead, where FCI corruption would not ruin farming fortunes. UP, on the other hand, wanted farmers to sell their produce at distress prices to middlemen.

Similarly, UP forced its farmers to sell milk to middlemen, who in turn paid them one of the lowest milk prices per liter in the country. If there’s one state that confirms the government doesn’t care about farmers, it’s UP. For decades, he has resisted the call for the creation of dairy cooperatives, which in turn can pay higher prices to farmers. Instead, middlemen were protected and pampered.

India is no better

But why blame UP alone. The central government must also share the blame. He has learned the art of extracting more money from his citizens even when their incomes have not increased so much. Thus, GDP per capita increased by 2%, while government revenues rose by more than 12%. 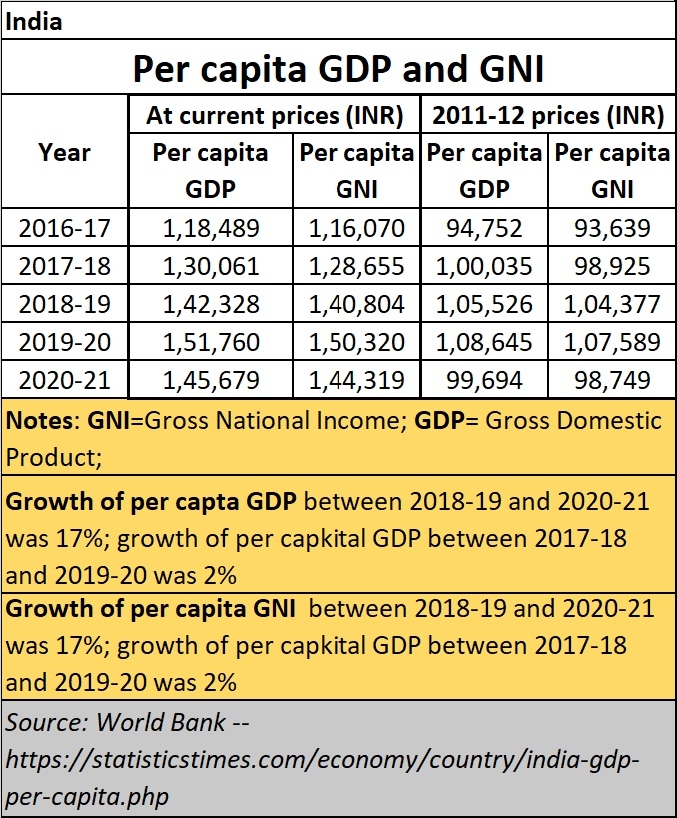 The government harmed agriculture by first denying farmers compensation for old cattle they could not sell to the trader. He refused to compensate the farmers forced to take care of the old cattle. Unsurprisingly, the streets of UP and Gujarat are filled with abandoned stray cattle. It has sought to allow the reckless import of edible oil, ban trade in raw materials for key products and impose ad hoc limits on storage. And now he wants to interfere with NDDB, the key institution that promoted dairy cooperatives and helped India become the world’s largest milk producer. 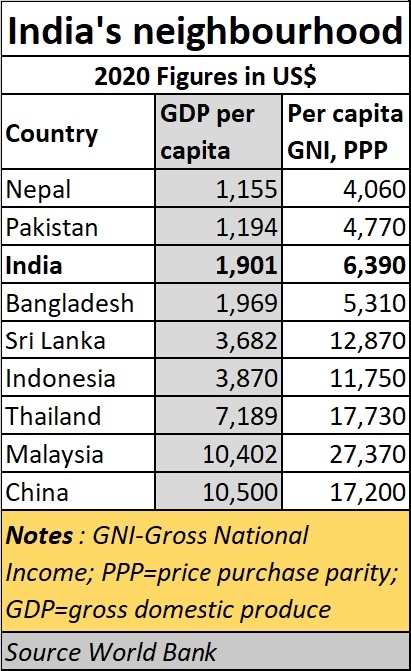 This allowed the UP to have a larger share of central funds. It allowed the state to overrule its police to sue any protester, even forcing the Supreme Court to intervene last week, threatening it with dire consequences if it did not immediately withdraw collection notices against protesters in the CAA (Citizenship Amendment Act).

His government was not marked for dismissal when a minister’s son rammed his convoy of vehicles into protesting crowds in Lakhimpur, killing four protesting farmers. Instead, once again, the Supreme Court had to intervene. The Supreme Court also had to intervene for Unnao’s rape and murder. UP remains the only Indian state to have failed to report on 36 of its children’s shelters. This was to ensure that children were not exploited and trafficked. The state has been pampered, its crimes silenced, and the common man exploited.

These distorted policies and state patronage have meant that even the country’s GDP per capita remains low compared to most of its neighbors. In terms of GDP per capita, only two neighboring countries (Nepal and Pakistan) have lower GDP per capita than India. Others, such as Bangladesh, Sri Lanka and China, have higher GDP per capita figures.

Again, the problem comes down to governance. India’s inability to rein in the police raj is a key cause. As the Observer Research Foundation pointed out in its monograph, “Jailed for Doing Business,” India has 26,134 jail clauses in its business laws. Most of the laws are outdated, even absurd (like offices must have x number of spittoons). The factory’s compliance inspector can register complaints against employers and bring them to court where they can be fined and sometimes sentenced to prison. The fact that few of them go to jail indicates that many government agents simply pocket money and ignore all crimes. Laws become excellent excuses for demanding bribes. From Boiler Inspectors to Labor Officers to Department of Stores and Establishments Officers to check on crimes committed by business establishments, all have been known to extort money. This in turn makes many micro, medium and small enterprises (MSMEs) sick. As Manish Sabharwal pointed out in a recent article, the number of laws is staggering. They become the main incentive to promote a parallel economy. The small trader is exploited, and run dry. 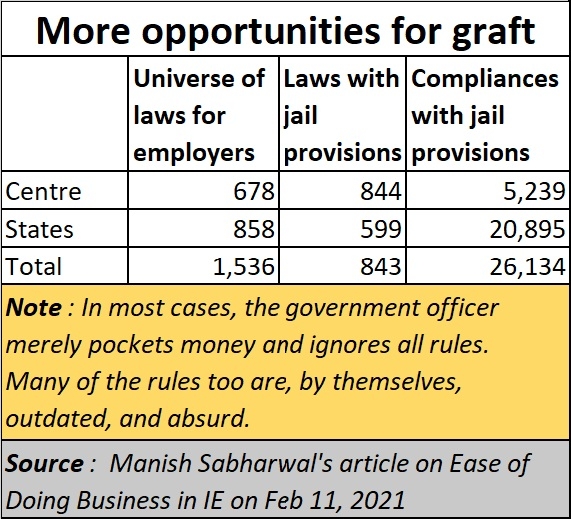 So it doesn’t matter if you have two engines or seven. What is needed is that the tracks are good and that they go to the right destinations. It’s not the engines that matter. It is the removal of barriers and fair access to markets and justice that are essential to development and growth.

UP is a classic example of what can go wrong with India. The sooner it’s settled, the better.

The author is a consulting editor at the FPJ

(To receive our E-paper on WhatsApp daily, please click here. We allow the PDF of the paper to be shared on WhatsApp and other social media platforms.)