Google recently added a new integration in code cloud with his Compute Engine Service (GCE) to make it easier for developers to manage their frequently used virtual machines in the IDE, view details about them, connect to them via SSH, download application files, and view their newspapers.

Cloud Code is a set of IDE plugins for a well-known integrated development environment (IDE) like VS-code and JetBrains IntelliJ that facilitate the development of applications using Google Cloud services. With the new Compute Engine integration, developers have a way to explore virtual machines (VMs) in their GCP project and view the details needed to work effectively with the VM from the IDE.

Developers can install Cloud Code for VS Code Where Cloud code for IntelliJ. Once installed, the developer can find Compute Engine in the activity bar in the case of VSCode or a list of IDE tools in the case of IntelliJ.

If you are a developer and have added the @googlecloud Code extension to your JetBrains or VS Code IDE, you can now manage your VMs without leaving your editor.

In the IDE, developers can access Cloud Code’s new Compute Engine Explorer, select a virtual machine, and view details such as machine type, boot image, and IP address. Additionally, they can right-click on a virtual machine to quickly access the Google Cloud Console, where they can perform additional actions.

Other actions developers can perform in the IDE are: 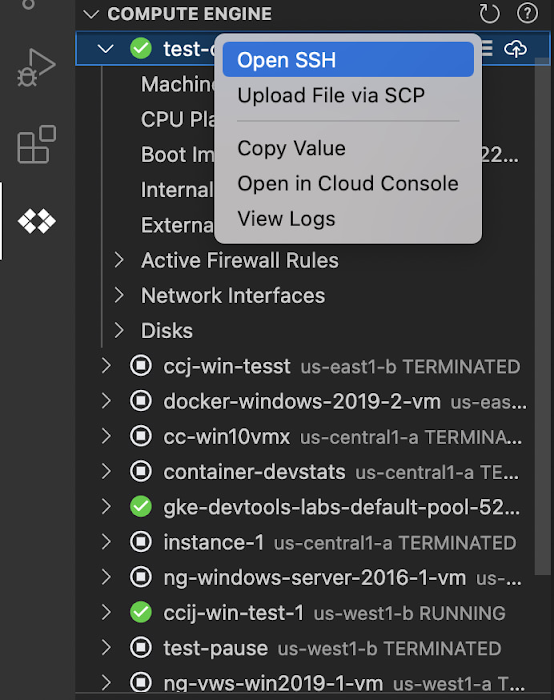 Note that VS Code, for example, also has a plugin preview on GitHub for Azure Virtual Machines. The plugin allows developers to view, create, delete, start, and stop Azure VMs. Additionally, developers can add an SSH key to existing Azure VMs.