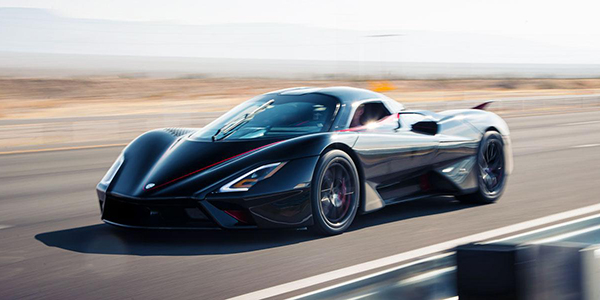 SSC has announced that it has broken the top speed record for production vehicles with its 1750 horsepower Tuatara supercar. With a fastest top speed of 331 mph and a fastest two-way average of 316 mph, the Tuatara is now the fastest production car on Earth, beating the Bugatti Chiron Super Sport 300+ by nearly 12 mph.

The record was set Oct. 10 on a seven-mile stretch of Nevada’s State Route 10, outside of Las Vegas. This is the same place Koenigsegg set its top speed record of 277.9 mph in November 2017. Unlike Bugatti, which only registered speed in one direction, SSC ran back and forth consecutively to hold up. wind resistance account, setting speeds of 301.07 mph and 331.15 mph, averaging 316.11 mph. A full onboard video of the 331 mph race can be seen below.

According to pilot Oliver Webb, “There was definitely more to it,” he said in a statement. “I know we could have gone faster. The crosswinds were all that kept us from realizing the car limit.

The SSC Tuatara is an American-made mid-engined two-seater that uses a 5.9L twin-turbo V8 producing 1,750 horsepower on E85 fuel. It weighs just 2,750 pounds thanks to its carbon fiber bodywork and has a drag coefficient of just 0.279. Nelson Racing Engines’ mirror-image turbos helped the SSC break the record.

This is not the first time that a car built by SSC has set the top speed record for a production car. In 2007, the SSC Ultimate Aero became the world’s fastest production car after being clocked at an average speed of 256.14 mph on a closed two-lane road in Washington, beating the Speed ​​King of the period, Bugatti Veyron.